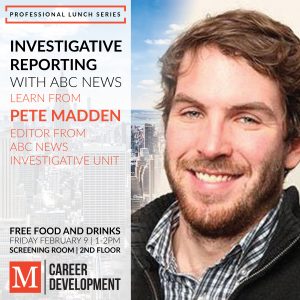 Pete Madden is an editor for the ABC News Investigative Unit, which contributes coverage of national security, political corruption and human rights to Good Morning America, World News Tonight with David Muir, Nightline and 20/20. Previously, he was a senior producer at Sports Illustrated, where he co-reported the magazine’s “First Golfer” feature about President Donald Trump’s global golf business. Trump called it “fake news” but the Washington Post called it “one of the best pieces of political journalism of the Trump age.” He is a graduate of Vanderbilt University and the Columbia Graduate School of Journalism.