Join us for our Professional lunch Series with Rose Frankel,  Director of Content Development at pocket.watch to learn more about Rose’s career trajectory and professional experience! 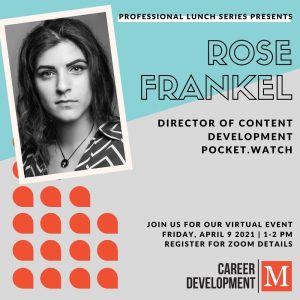 ROSE FRANKEL is an award winning development executive, writer, and producer. Rose graduated from the Macaulay Honors College at Hunter College in 2018 with a BA in Media Studies, a minor in Creative Writing, and certification in Transmedia Storytelling and Digital Content Marketing. She is currently Director of Content Development at pocket.watch, where she has been working since the company opened its doors in 2017. Rose was honored as a 2020 Cynopsis Rising Star in recognition of her significant contributions to the quickly growing company. She developed, produced, and wrote a number of episodes for the Daytime Emmy Nominated #1 show on preschool television, “Ryan’s Mystery Playdate” (Nick Jr.). Currently, Rose is developing, writing, and co-producing the upcoming animated comedy series “Onyx Monster Mysteries,” and animated horror-comedy series “Zombees.” Recently, Rose wrote the first animated special on Amazon Kids+, “Super Spy Ryan.” She also co-created and is the Head Writer of “Love, Diana,” an animated fantasy adventure series starring one of YouTube’s biggest creators, Diana of Kids Diana Show. Rose has also been a potter for almost fifteen years; in her spare time, she teaches beginners through advanced level pottery, as well as sells her own work.

We are the only kids and family digital-focused studio that delivers 7.4 BILLION views every month — and growing. We’re on a mission to transform the top-performing family YouTube channels into multi-category global franchises, and we’ve got it all — The Stars, The Shows, and The Goods — to bring kids more of what they love everywhere that kids play.


This is an event taking place virtually. Details will be sent to you after registration.