Networking Is (not) Scary

Everyone in college stresses the importance of networking.  Networking is the opportunity to establish mutually beneficial relationships with the people you meet. You want to be able to offer something to someone you network with, and in the future they may have something for you. There are networking opportunities everywhere, not just at a career fair. There are networking opportunities at school events, at the coffee shop or even in the subway station. For some people networking may seem like a big deal. Well it is, but at the same time it isn’t. If you consider yourself an introvert and are intimidated by networking read these tips and tricks on how to make networking seem not so scary:

Have a Conversation Starter Ready

If you are nervous about approaching people and you are unsure of how to start the conversation, have conversation starters ready in mind. There are many things you can talk about from introducing yourself, asking about the person, talking about the weather or location to telling a funny joke (make sure the joke is actually funny). Networking becomes easier when you have a standard conversation starter that you can use on anyone you meet, this way you don’t have to think about what the first thing you should say is each time!

Career fairs and networking events sometimes have a list of the people who are attending. You can do some research on a couple of individuals and find out what their job is and their basic information. This way, you can easily approach them and tailor the conversation for each booth. Make sure you aren’t coming across as too creepy – don’t mention their wife or kids’ birthday party that they attended two years ago.

An important part about networking is listening to what the other has to offer – you want to make sure you are effectively communicating with the other person by actively listening. Active listeners are engaged in the conversation and know when the play the role of the listener and when to play the role of the speaker. You should keep eye contact, nod while listening, and ask questions or paraphrase. This way the person you’re speaking to knows that you were paying attention to them while they were speaking.

If you are not comfortable about approaching people first, people may come and approach you! But they won’t approach you if you don’t look very friendly and are hiding in the back corner. Smiling is an easy way to seem approachable. It’s very important to look and seem confident – even when you aren’t. Giving the illusion of confidence may actually boost your own! You’re most approachable when you’re relaxed and calm – it may help to bring a networking wing-woman/ wing-man. Establish a buddy system if you’re still unsure about venturing by yourself.

The last thing to do after networking is follow up with the person! While networking, make sure you obtain the person’s contact information so you can email them and set up another day to get coffee to catch up or connect with them on LinkedIn. This way you become more memorable to the person you’ve just connected with!

Still need help with Networking techniques? Email Gianina Chrisman at Gianina.Chrisman@mhc.cuny.edu or Jamie Ruden at Jamie.Ruden@mhc.cuny.edu to make an appointment. 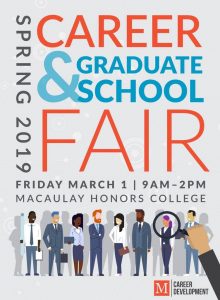