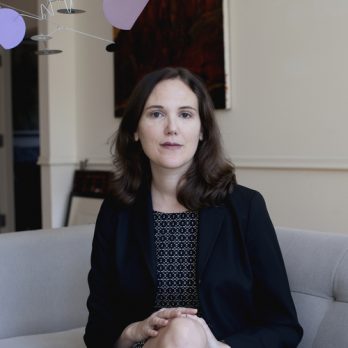 As America’s only full-time professor of art crime, Professor Thompson studies the damage done to humanity’s shared heritage through looting, theft, and the deliberate destruction of art. She has discussed art crime topics in The New York Times, CNN, NPR, and the Freakonomics podcast, among other publications, and have been invited to lecture at MIT, Carnegie Mellon, and Columbia, as well as many other venues.

Her book, Possession (Yale, 2016) explores the history of the private collecting of Greek and Roman antiquities; NPR said that it “realigns our own sensibilities about art” and named it a Best Book of 2016.

She is currently researching the ways in which terrorist groups both sell and destroy art to support their genocidal campaigns, as well as the legalities and ethics of digital reproductions of cultural heritage.

In 2017, Professor Thompson co-curated an exhibit at John Jay of art and literature by detainees at Guantánamo. She is in her fourth year of teaching the Macaulay Honors College seminar Arts in New York City.

“Which Public? Whose Interest? Rethinking Merryman’s ‘The Public Interest in Cultural Property’,” Art, Antiquity, and Law (in press).

“Recreating the Past in Our Own Image: Contemporary Artists’ Reactions to the Digitization of Threatened Cultural Heritage Sites in the Middle East,” Future Anterior (in press).

“‘But We Didn’t Steal It:’ Collectors’ Justifications for Purchasing Looted Antiquities,” Journal of Art Crime (2015).

“The Successes and Failures of Self-Regulatory Regimes for Dealing with Museum Holdings of Nazi-Looted Art and Looted Antiquities,” 37 Columbia Journal of Law and the Arts 379 (2014).

“Invisible Men and Women: Art and Alternatives to the Rule of Law,” essay in the catalogue for the exhibition “The Rule of Law and the Right to be Human,” Athens School of Fine Arts, Athens, Greece, May 30-June 13, 2014. (Simultaneously published in Greek translation).

“The Relationship between Tax Deductions and the Market for Unprovenanced Antiquities,” 33 Columbia Journal of Law and the Arts 241 (2010).

“Pixels v. Propaganda: How Digital Technology Can Stop ISIS,” guest post on the Research Blog of John Jay College’s Office for the Advancement of Research, May 9, 2016.

“Just Give Him What He Wants,” post on the ethics of studying unprovenanced Ancient Near Eastern inscriptions, for “The Nature of Our Ruin,” a project of the Penn Program in Environmental Humanities, February 19, 2016.

“How Twitter Could Bring ISIS to Trial,” The Crime Report, September 8, 2015.