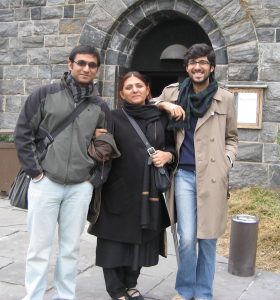 Macaulay: Can you share with us some biographical background?

I am a Professor of Sociology, Chairperson of my department, and the Director of the Honors Program at St. Francis College in Brooklyn Heights. My husband Dhiraj Mathur is a Partner at Price Waterhouse Coopers’ New Delhi office. We came to New York City from New Delhi in 1998, the boys were in 5th and 8th grade — they both went to Brooklyn Technical to complete their High School education. Our older son Dhruv Mathur is an Electrical Engineer now pursuing his Master’s degree at SUNY Stony Brook after two years of work experience and graduating from the Honors Program at the Polytechnic Institute at NYU. Macaulay Alumnus Sohail Mathur ’10 (Hunter) is our younger son, I am also guardian/the ‘resident parent!’ for my nephew, Macaulay Alumnus Rattanamol S. Johal ’09 (Baruch), and his younger sister Mannat Johal, Wellesley College ’12. Their mother, my sister, Dr. Ramanjit K. Johal is a Professor of Public Administration and Chairperson of her department at Punjab University, Chandigarh, India and will be at the School of Public Affairs Baruch College on a Fulbright Teaching Scholarship in Spring 2012.

M: What was your hope for your nephew and son when they started Macaulay Honors College?

I have been familiar with Macaulay Honors College from its inception as many of my older son’s friends from Brooklyn Tech. attended and it was their wonderful experience that inspired me to mail out the application to my nephew Rattanamol in India. He was accepted as an international student in the program and came to live with me. I  experienced firsthand the growth of this young man ready to take on the world equipped with his MAC and cultural passport! He shared the wonder and joy of his New York Seminars with my son Sohail and me and we watched while not just the metropolis, but the World became his ‘oyster’. No surprise then that when it was time for college applications Sohail applied to Macaulay as an early decision candidate and the cousins became ‘Cousins at CUNY’! My hope for Sohail was that he enjoy his experience, make most of the opportunity, develop, mature, and, pursue his academic goals in this nurturing environment amidst peers who strove for knowledge and excellence.

M: What was the biggest surprise?

No big surprises really [for Rattan], a few unpredictable turns and much validation of expectations. I suppose Rattan’s beginning as an Economics and Political Science major and graduating as an Art History and Political Science Major with minors in Math and French was a surprise for the family! Thanks to Macaulay, between New York City, all his wonderful internships and his study abroad in Paris, he discovered his passion for the Arts and went on to pursue a Masters in ‘Politicizing Aesthetics’ at the Courtauld Institute of Art, University of London. He is at present a curator for an exhibition in New Delhi as part of his Curatorial Residency at Khoj International.

Sohail surprised me somewhat by exploring his leadership potential and participating actively in Student Government at Hunter College. His study abroad in Madrid opened up the prospect of acquainting himself with yet another culture and exploring yet another continent. His internships in Washington D.C. and Costa Rica fueled his engagement with policy and he spent the last year in the Ministry of Commerce, Government of India, sponsored by a World Trade Organization initiative. I suppose the surprise in this case was that his major in Economics and History with International Relations along with a minor in Spanish, he has not taken the predictable path to law school but instead made him pause and consider?!

M: For parents with students just starting college, what would you say, from your experience, is the most important thing to keep in mind?

If your child is at Macaulay, he or she has made the right choice. The admission with its full scholarship is recognition of the student’s potential. Thus relieved of economic constraint, you are free to concentrate on providing much needed encouragement, guidance, as well as moral and psychological support–basically to be parents without the price tag!

Based on my personal experience (twice over!), I can assert confidently the myriad of opportunities and meaningful experiences that await your child–having the most fascinating, global and unique city as extended campus is just the icing on this cake. Encourage them to make the most of what this institution has to offer, to participate fully in the program, and, to open themselves up to all the learning, formal and informal. Rest assured your child is in good hands, sit back and watch them flower. You now have the chance to vicariously live the Macaulay way–enjoy!

Every Macaulay student may apply for $1,500 to support experiential learning.