Inspiring the Class of 2021

Macaulay Honors College is thrilled to announce that writer, activist and comedian Baratunde Thurston will serve as the 2021 Commencement speaker and is set to receive an honorary degree from the college. Thurston will address Macaulay’s graduates during a virtual ceremony on June 3.

“Baratunde Thurston is one of the most important voices of our time,” said Macaulay Dean Mary C. Pearl. “He manages to be absolutely serious and brilliantly analytical, while at the same time hilariously funny and warmly empathic!” 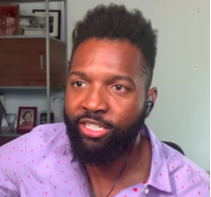 Thurston is an Emmy-nominated host who has worked for The Onion, produced for The Daily Show, advised the Obama White House, and wrote the New York Times bestseller How To Be Black. He’s the executive producer and host of two podcasts: “How To Citizen with Baratunde” and “We’re Having A Moment,” which CNET called “the most important podcast of 2020.” He’s the creator and host of the weekly pandemic show, “Live On Lockdown,” and in 2019 he delivered what MSNBC’s Brian Williams called “one of the greatest TED talks of all time”. He also serves on the boards of BUILD and the Brooklyn Public Library. MORE