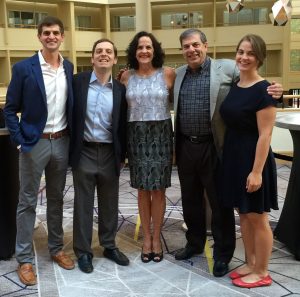 “I’m a walking, talking Macaulay advocate,” said Mary Marks. Mary and her husband Alan Marks are the proud parents of Stacey, who graduated in 2017.

Mary cites three big benefits of Macaulay Honors College: “having a great education, coming out of college with no debt, and having the ability and educational background to compete for top-notch graduate programs.” Mary said that she tells parents and high-achieving high school students to look at Macaulay’s acceptance rates at highly ranked medical and law schools.

Mary said that Macaulay is increasingly being recognized on Long Island, where she and her family live. “Years ago, school district superintendents had never heard of Macaulay. Now, every year several valedictorians from Nassau County schools go there.”

What stands out for Mary about Macaulay is the experiential learning, especially study abroad. As a scholar both at Macaulay and in the Hunter Chinese Flagship program, Stacey got what Mary calls “a compound benefit.” Between the two programs, Stacey studied in several cities in China, learned about sustainability at Tel Aviv University, and interned at the U.S. embassy in Australia. She benefited not only academically but also personally, according to Mary.

The study abroad “gave her a depth and breadth of experience that enables her to be independent,” Mary said. She felt that Stacey, unlike some other people her age, is “ready to be on her own.”

The Marks family supports Macaulay not only through their words but also through donations. “We are big believers in paying it forward,” said Mary. “If we could contribute to help other kids like Stacey achieve their goals and follow their dreams, why wouldn’t we?”