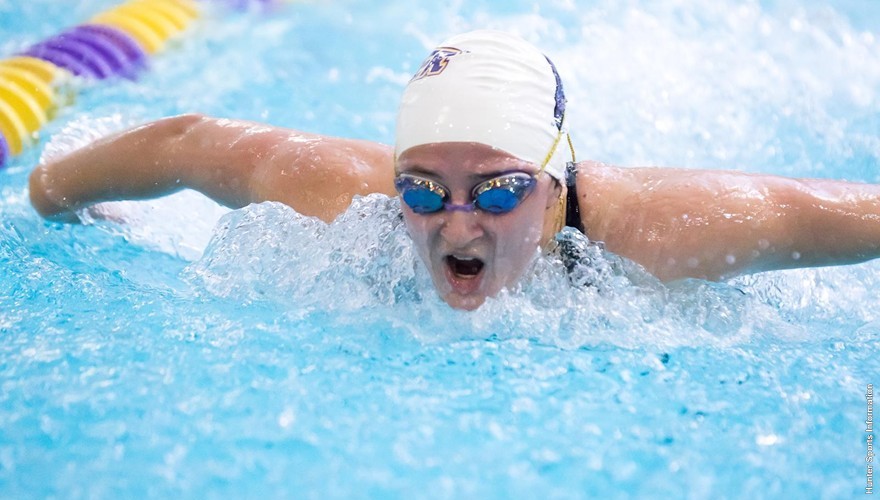 For the third month in a row, a student from Macaulay Honors College has been designated a CUNY Scholar-Athlete of the month. Timothy Sweeney, ’17 (College of Staten Island) is the CUNYAC-Hospital for Special Surgery Scholar-Athlete of the Month for February. The senior from Staten Island, NY has accumulated a 3.86 GPA while majoring in Math and minoring in both Finance and Geography. Sweeney had an outstanding month of February for the Dolphins, beginning the month at the CUNYAC Swimming and Diving Championships where he earned his third CUNYAC Championship MVP in a row. He scored 48 individual points throughout the weekend, and earned six gold medals. In the process, Sweeney broke two more individual records in the 100 and 200-yard butterfly at this year’s meet, giving the senior six career CUNYAC Championship records.

Lindsey Pero, ’17 (Hunter), majoring in English with a minor in Media Studies, was the CUNYAC Scholar-Athlete of the Month for January 2017. Pero is a four-time CUNYAC Women’s swimming and Diving All-Star, while maintaining a 4.0 GPA and working to become a teacher after graduation.

Naomi Gaggi ’17 (CSI) was named the CUNYAC Scholar-Athlete of the Month for December 2016. The senior from Brooklyn, NY earned a 3.9 GPA as a Psychology major with a concentration in Neuroscience and Autism Spectrum Disorder. Gaggi was also a Goldwater Scholarship finalist last year. The Dolphins’ distance swimmer earned 10 first place finishes and a total of 24 podium finishes in the month of December alone.