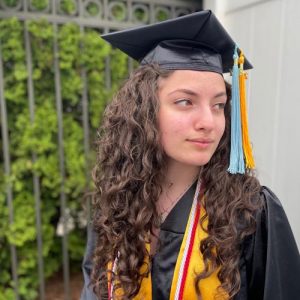 Lauren M. Silverman ’21 is a Cinema Studies major and Design & Digital Media minor at Macaulay CSI. She recently completed an internship at the Museum of Jewish Heritage through CUNY Cultural Corps, where she worked with the Collections and Exhibitions department to preserve Holocaust survivor testimonies. She will be returning for a second internship in June.

In Spring 2019, Lauren was elected Music Director of WSIA, the College of Staten Island’s radio station. She also worked as the Layout Editor for the campus newspaper, The Banner.

She has been involved with film events at both her home campus and Macaulay–she was a student producer of the 2019 CUNY Film Festival and an intern for the 2020 CSI Tournées Film Festival. After serving as a production assistant recording promotional shorts for Macaulay, Lauren was appointed Co-President of the Macaulay Honors Student Ambassadors in Fall 2019.

This fall, Lauren will be attending the Feirstein Graduate School of Cinema at Brooklyn College for her Master of Fine Arts in Screenwriting.