A Brief History of Intense Ohana

Macaulay is thrilled to congratulate the students and alumni of the college’s quadball club on a decade of community growth.

It’s been ten years since the Macaulay Marauders, founded by Jenna Jankowski ’14 (College of Staten Island), first donned their red uniforms and played in a tournament. The college’s only organized sports club has come a long way.

“I hosted a general interest meeting at CSI and so many people showed up,” Jenna recalls. “I was surprised at the interest, and they wanted to start playing right away!”

Known as quidditch at the time, the team became the first student-led organization to meet regularly and bring together students from across all Macaulay campuses.

Many of the team’s early traditions remain embedded in the Marauders’ quadball culture today. The first Marauders team created their own chant, “Ohana,” a reference to the Hawaiian term for family that has come to embody the group’s inclusive, warm energy.

“Our team chant is very important to us,” say current team members Jonathan Kogan ’23 (Hunter College), Ariana Gladstone ’21 (Hunter College), and Ariana Verbanac ’25 (Queens College). “We perform the chant before every game and use it to hype ourselves up and show our pride for our school.” “Ohana” earned the Best Chant award by US Quidditch in 2020.”

The Marauders club experience has created lasting bonds across the different campuses, majors and classes. “It takes a very weird person to put a broom between their legs and run around on a field,” Jenna explains. “But the other players became my best friends. We worked together, we travelled together, we got injured together… two couples even got married!”

“We are all close friends outside of the sport,” add Ariana and Ariana. “Whenever we travel for tournaments, we get dinner together, laugh, explore the cities we’re in, and generally have a good time.” Another important team tradition is the annual presentation of the Andrew Krinick Award, given to a club member who exemplifies the idea of Ohana. The award honors the memory of a former Hunter College Marauder who passed away in 2014.

A tradition of inclusivity has also helped define the Marauders over the years, and remains an important value for the club. Early on, the club established a widely inclusive approach, even welcoming students who had never played any kind of a sport. The current roster boasts a wide diversity, including Jewish, Latine, Asian players, players born outside of the US, and members of the LGBTQ+ communities.

“We always aim for inclusion and respect in our team,” says Jonathan. “And we call ourselves an Ohana because we are more than a team—we are a family!” 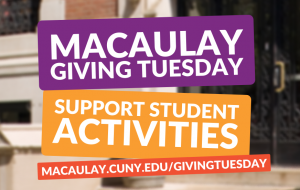 November 29th is #GivingTuesday — when our entire community comes together to support our students. Join the growing tradition!